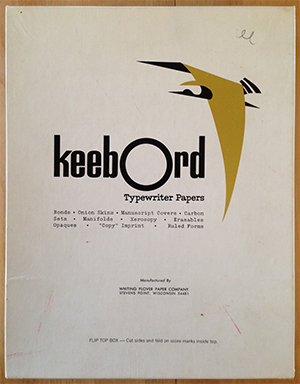 Before I graduated from college, my mother asked me what I planned to do with my life. She wanted to know not just what kind of career I was interested in, but what I wanted to accomplish. I remember telling her that one of my goals was to write a book. I didn’t say when I would write it, or what it would be about, or even whether it would be fiction or non-fiction–just that I wanted to write. When I graduated, she gave me a ream of erasable bond typing paper to use for my writing.

I didn’t get around to starting my first book until about a year ago, more than 14 years after my mother’s death. In the meantime, of course, computers had turned erasable bond typing paper into an anachronism, and there were times I used some of that ream for other purposes. But I kept what remained all these years, and it served as a gentle reminder of what I had told her so long ago. As I worked on the drafts of my book, there were times I had a passage that I wanted to read and make notes on in hard-copy, and I printed them on the paper she gave to me.

My book is not the kind of book I could have predicted 40 years ago that I would write, and I’m sure the genre I chose would have surprised my mother (just as it has surprised many of my friends). Nevertheless, it is my first, and I have dedicated it to my mother, who gave me so many gifts … one of which was a ream of erasable bond typing paper.

2 Comments on “A Mother’s Gift”